Thanksgiving is almost here and what does that mean? Pumpkin pie!! I don’t know about you, but each year I look forward to copious amounts of pumpkin pie between Thanksgiving and New Years.

Pumpkin is native to North and Central America and has been traced back to 5500 BC in Central America.  Native Americans presented pumpkins to pilgrims and showed them various ways to use it. The first pumpkin pie recipes were actually not a pie but consisted of sweetened and spiced pumpkin baked in the pumpkin shell.

In 1796, pie became nationally recognized with the publication of Amelia Simmon’s cookbook American Cookery – the first American cookbook written and published in the U.S.  It included two pumpkin pie recipes – or pompkin as known then. One was very similar to the pie we know today.

Writer Sarah Josepha Hale, often called the “Godmother of Thanksgiving”, published an abolitionist novel in 1827 called Northwood and described a Thanksgiving meal that included pumpkin pie.  For more than 30 years, she championed making Thanksgiving a holiday, arguing it was a way to create national unity.

In 1863, Abraham Lincoln declared Thanksgiving a national holiday – with a huge outcry from many Southerners who felt he was trying to force Northern culture on the South.

But Southern chefs soon put their own twist on Thanksgiving pie by using sweet potatoes. Today, the South leans toward pecan and sweet potato pie, with the Northeast preferring apple – though all areas still enjoy the everlasting pumpkin pie. 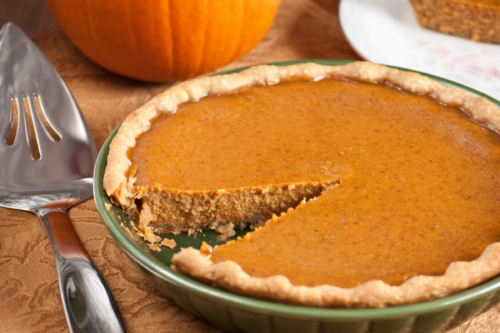 Even though pumpkins are more nutritionally close to vegetables, they are actually fruit because they have seeds. Pumpkins are nutritious and include fiber, vitamins like C and K, minerals like iron, and antioxidants like beta-carotene (that convert to vitamin A).  And although there is sugar in pumpkin pie, it’s considered one of the healthiest (or least bad for you) pies around.

Some ideas for making your pie just as tasty and decadent but a bit less naughty include swapping out less good-for-you ingredients for:

Can’t skip the whipped cream?  Then try this recipe for marshmallow fluff that has two ingredients – chickpea water (aquafaba) and honey or agave – and two optional ingredients.

If you choose to buy canned pumpkin, you have two choices – canned pumpkin or pumpkin pie filling.  Canned pumpkin is just that – pumpkin (though there is some controversy around this…keep reading for more…).  There should be no other ingredients – check the ingredient section on the label to make sure.

Pumpkin pie filling comes with pumpkin, spices, and is usually pre-sweetened.  All you have to do is add eggs and milk (or find a vegan alternative) and usually some type of sweetner.

Look at the can carefully in the store to make sure you are buying the type you want.

As we always say, organic is the better option – locally-grown organic is even better.  Canned pumpkin is also packed with nutrients and is a good option, so what should you do?

The bottom line is to be realistic and make a choice from where you are – eating pumpkin over candy is obviously the better option, so any choice including pumpkin is good.  If you live near a farmers market or farmstand, buying from a neighboring farmer is your best option – support your local farmer and economy. Have some fun and find a pick-your-own field!  And if your budget will allow and there is an organic choice, opt for organic pumpkin.

So our first choice would be to find a local farmer selling organic pumpkin, second choice is conventional, and, third canned.

If you aren’t really a cook (I confess, that’s me!), the third choice – canned – is probably more realistic, so buy organic pumpkin puree or pumpkin pie filling in a can.  If you do make your pie this way, please note that some brands add squash in with the pumpkin even though the label says 100% pumpkin. This is a rather confusing issue because pumpkin is closely related to squash, and the USDA is rather lenient on the labeling of squash in pumpkin, so there’s disagreement on how un-pumpkin some brands are.

This means if you’re a pumpkin purist, you might want to use an actual pumpkin to guarantee you are actually using all pumpkin.  For the rest of us, just know any squash used should not affect the flavor of the pumpkin filling – and has its own health benefits!

A benefit of buying your own pumpkin is the seeds.  Pumpkin seeds can be easily removed from and baked to make a delicious, healthy treat.

First, scoop the seeds out of the pumpkin, remove the stringy bits, and wash the seeds off.  Arrange them in a single layer on a baking sheet. You can either leave them overnight to dry, or put them in the oven at 300 degrees for 30 minutes.

Toss seeds with olive oil and sea salt or other flavorings of your choice (grated parmesan and oregano anyone?) and roast for 30 minutes at 300 degrees.  They’ll last about a week in an airtight container.

Pumpkin seeds are noted for their high levels of magnesium and zinc and also contain protein, unsaturated (good) fat, iron, selenium, calcium, B vitamins and beta-carotene (vitamin A).

If you can’t be bothered to roast the seeds, let them dry and put out for the birds to enjoy.

Do not throw the rind, seeds or parts into the trash.  At a minimum, please find a local composting facility to drop off any pumpkin you don’t use.  Many farmers markets have composting bins available.

Also, please note, if you’re tossing leftovers into your compost pile, if you throw in the seeds, you might end up with a load of pumpkin plants – which isn’t really a bad idea, is it?

Squirrels and other wildlife love pumpkin so don’t be afraid to leave any leftovers out for your neighboring animals.  Did you know other wildlife also love pumpkin? Check out the animals at Walt Disney’s Animal Kingdom. Bats! Tigers! Elephants!  Who knew?

Amelia Simmon’s recipe for pumpkin pie in American Cookery was a bit light on measurements but looks heavy on the deliciousness.