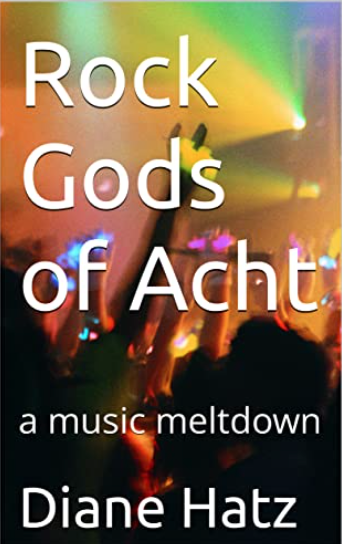 Rock Gods of Acht has been updated and is being re-published in summer 2022 as Rock Gods & Messy Monsters. Stay tuned for more details! Subscribe to Next Draft with Diane Hatz to stay up-to-date with book details and release information.

A March 2022 review of the ebook stated:

Why have the masses not heard about this book? It’s exactly what I didn’t know I needed – medicine for the soul and spirit disguised as a Voodoo Donut plastered in Fruity Pebbles.

This is a cautionary tale of how pursuit of the thing you love – once that thing has been crushed to bits and fed to a power-hungry Machine – becomes the very thing that crushes you and everything you once loved about yourself. It’s about the sick and strange ways we allow ourselves to be held hostage by these Machines.

And it’s about the hidden/not hidden truth that the four walls around these Machines have a door that is not locked. We are free to leave – but must leave to be free.

Originally published in 2008, the hard copy of the book still available from online retailers, including the indie Bookshop.org.

A press release for the original book sums up the novel:

Surrealist exposé on the downfall of the corporate music industry out now!

The nineties: the era ushered in by grunge and escorted out by the MiniDisc. These were the reigning glory days of the corporate record industry—music before the masses’ access to the Internet. It was Rome before the fall.

Rock Gods of Acht tells the spiraling tale from inside the industry, with surreal dimensions that author Diane Hatz describes as “the only way to capture the insanity of that era.”

The novel takes place in the monolithic halls of Acht Records, an industry behemoth recently bought out by the Yakadans, an imperialist alien race eager to test its new technology—clonebotting—and to hatch (literally) a superstar performer called Big. Thwarted Acht secretary Alex is trying to get out of her dead-end position, while her maniacal boss Langferd explodes blood vessels all around her. At the top, Vinny DiMachio, Deity and Ruling Dictator of the company, plots how he can become the richest, most powerful man in his universe, sealing his Caesar-like fall.

These and Rock Gods of Acht’s riot of other all-too-real characters weave in and out of each other’s lives, coming together for the huge finale—the breakout live performance of Big at the famed Salvadori Ballroom, a show that ends up nothing short of explosive.

Hatz can tell the tale, because she was there. “When I first became involved with music, there was an electric, vibrant energy that fueled my passion for working in the industry,” she says of the era. “But then I went to a major label as it was absorbed by a large faceless corporation and watched the life get sucked out of the company, the music, and its employees. It’s no mystery why most corporate music has no soul.”

Rock Gods of Acht reveals that success can be more than we bargained for—or less than we imagined. It’s also a loving ode to rock’n’roll. With equal measures science fiction, eye-witness account, and soul-searching revelation, the book serves absurdist delight, hard-knock realism, and mad laughs in generous, balanced proportions.

Review from Kirkus, a trusted publishing resource for 89 years:

An edgy, experimental parable depicting the overarching avarice and corruption of the gods and monsters behind the corporate-music industry of the ’90s.

A cast of caricatured characters shapes the workforce of the music giant Acht. There’s Alex, a secretary with mood ring-like hair who must deposit her brain every morning in a jar; she spends most of her time cleaning up her villainous boss’s blood when his vessels erupt in a rage. There’s Weena, a music executive who literally falls apart at every meeting and constantly relies on medical repair and reattachment glue to keep her limbs together. And Skeeter, an A&R exec toting a taxidermied ferret; he may be the sole employee who actually cares about music. Finally there’s the head of Acht, Vinny DiMachio, and his permanently attached “sidekick” Jeremy Wickett.

When Acht is bought out by a green-tinged race of extraterrestrials called Yakadans, they create a seven-foot-tall clone-bot named Big—with an uncanny resemblance to Elvis—who is slated to dominate the record charts despite his inability to sing or dance. And, in accordance with Acht’s highly paid executives scheme, Big becomes a worldwide phenomenon. They all seek a piece of Big’s success—the executives want to become richer and more powerful, and the underlings seek to move up and out of their hellish clerical stations. When Alex finally scores a promotion through a cringe worthy encounter with a creepy executive, she finds her goal is not as rewarding as she had hoped. In a monumental performance, Big melts down—literally—on stage and vanishes. Infuriated, the Yakadans do some house cleaning, leaving the bloated executives to receive their much-deserved comeuppance.

Though the book is a slightly predictable assessment of corporate-music greed, this is overshadowed by the highly imaginative populace of Acht. Once readers orient themselves with the idiosyncrasies in Hatz’s darkly whimsical—yet ultimately relatable—novel, they’re in for a fast paced, entertaining comic treat. Character-driven, this loopy satire is a droll examination of the corporate-music world.